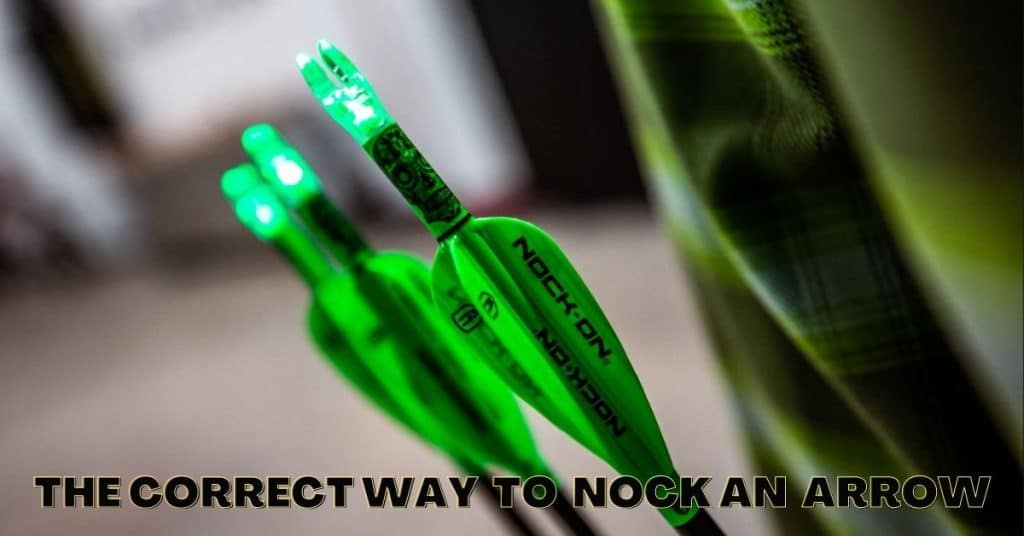 Nocking an arrow is an easy yet tricky task. Make sure that you are putting the arrow on the string in the right way.

Today we’ve decided to provide you with a complete guide on the correct way to nock an arrow, perfect for beginners, but even if you are an advanced archer, this can be really helpful to save time and just make your overall shot more efficient. Especially is you’re doing any team around of thing; you don’t want to be fumbling with the arrow at all

This isn’t the hardest thing to do. All you need is proper guidance and some tips. People ask some exciting sort of questions about the specific ins, outs, how’s, and quirks. So, we decided to combine these questions and help you out in a simple way.

Let’s see what can work when it comes to nocking an arrow faster and correctly. Some of the ways are pretty easy. However, some of them need some practice. There goes a phrase like there are many ways to skin a cat. So, we will go through some of the ways through which you can nock an arrow correctly.

Let’s have a look at the best ways to put the arrow from your quiver and nock it!

Most of you might have an idea about nocking of an arrow, but for the beginners. Please have a look at it!

Nocking is basically holding the arrow with a suitable position on a bowstring. After that, it is only released when we release the string. Most of you might have noticed that there is a plastic part at the end of an arrow, this is the part that connects the arrow with a string. And, when the arrow is nocked, a “click” sound is produced there.

Parts of an Arrow:

Firstly, take a look at the image below:-

In order to nock an arrow correctly, you first need to know about the parts of an arrow thoroughly. From the image, you can see that an arrow has four parts. And, they are:

Arrowhead is basically the tip of an arrow that is sharp to cut into the target easily. Most of the materials used for constructing arrowheads are stones, horns, sticks, bones, and metal.

The main body of an arrow is called the shaft. It is stem-like and elongated. It is considered as the central and basic unit where all the other parts are attached to. Wood, carbon fiber, aluminum, obsidian, and some other materials are used to make the shaft.

The fletching is the feather-like structure present at the end of an arrow. Most of the time, there is 3-4 fletching present on an arrow. They are supposed to provide stability to the arrow. They also increase the velocity of an arrow and help it reach the target faster.

However, one feather is different in color from the other feathers, and it is called a “cock”, the left feathers are all the same in color and are called the “hen.” The cock is pointed towards the archer and the others are in the opposite direction. The “cock” plays an essential role in nocking the arrow.

The last yet crucial part of an arrow is the nock. It is pretty small in size, and it present at the very end of an arrow. A nock is made up of plastic with a bit of slit in its middle.

The slit in the nock is present so that the string can struck in it and for adjusting the arrow on the string. It prevents the arrow from falling down when you are drawing or releasing it.

How to Nock an Arrow:

After knowing well about the parts of an arrow, we can now quickly move towards the core of the article and tell you the best ways to nock an arrow correctly.

Here, remember one thing: make sure not to keep your bow horizontal if you are practicing archery and the group of archers. In case you like to shoot without a shelf. Then you can keep the arrow in your hand. However, remember to put some kind of protection on your hand so that they don’t get any harm.

In order to avoid any unhappy incident, make sure to raise your bow only if you are willing to aim, otherwise keep it down.

The second step is, checking the orientation of an arrow. So, an arrow can be attached to the string in two different ways, but you have to choose one of them for perfection. The nocking of an arrow depends upon the bow type, so let’s have a look.

In these two bows, the fletching point must be away from the riser. Based on the fletching colors, you can easily get to know how to nock an arrow correctly. But how?

The “hen”‘ must be closest to the riser while the “cock” must be pointing away from the riser. But this trick only works when there is two flitching called “hen” and one called “cock”. So, if there is a ratio of 3 and one, then this trick cannot work there.

Compound bows have arrow rest in them for convenience, and arrows are shoot through them. So, the arrow doesn’t rest against the bow, and there, the arrow rest helps in releasing the arrow.

Hence, the “hen” fletching on an arrow must be pointed upwards so that you face zero errors while shooting.

But here, most of the archers face an issue, and it is that the nock of an arrow slips up the nocking point, but you can avoid it by an upper nocking point.

If the nock fitting of your bow is loose, then change the string because it can lead to the dryfire of the bow.

Ans: Yes, they are, and if there aren’t two, then there should be the upper nocking point because they help you to place the arrow correctly and prevent it from clumsiness.

2. How can we nock an arrow while using the clicker?

Ans: Nocking an arrow is difficult while using a clicker. But, of course, it is not impossible. In that case, place the arrow’s nock under the clicker immediately. However, this can also be done after attaching the arrow to the string.

3. How far from the end should the fletching be placed?

Ans: Well, it’s better to place them 1inch away from the nock-end for better performance and accuracy.

Nocking an arrow correctly is the main issue faced by beginners, so that this guide would help them there. Moreover, remember to keep your bow down when it is not in use. It saves you and your members from any mishap.

We hope you’d find this article helpful. Let us know if you like it.

In case of any queries and suggestions, comment below!